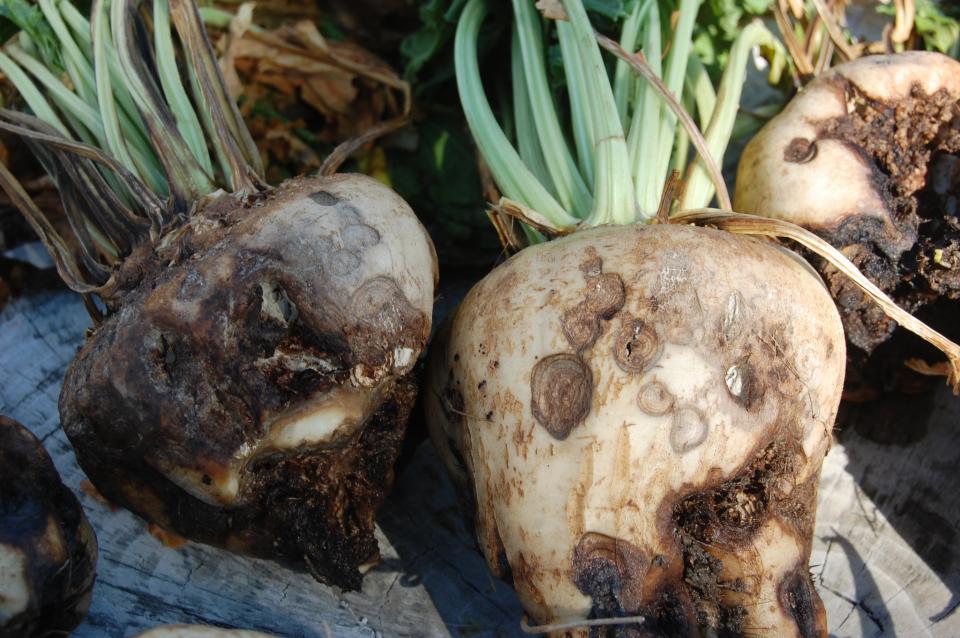 Figure 1. Surface tissues of the dry rot canker rhizoctonia disease first identified in sugarbeet in 1920 are marked by a distinctive series of concentric circles. (Photos by Bob Harveson)

Last month I shared a brief synopsis of the rarely occurring root disease, violet root rot, its causal agent, Rhizoctonia crocorum, and its relationship with the root and crown rot pathogen, R. solani. This article will highlight an even more uncommon Rhizoctonia disease of sugar beets called dry rot canker. Although virtually unknown in sugar beet production, researchers recently determined it was caused by a largely uncharacterized species of Rhizoctonia, referred to as “binucleate.”

New Disease
B. L. Richards reported a previously undescribed root disease of sugar beet near Cornish, Utah in August 1920, calling it dry rot canker (DRC). The disease was characterized by localized, dry sunken lesions that penetrated deeply into the taproot interior, causing the decaying tissue to rapidly dry out as infection continued inward. Surface tissues of the cankers produced a distinctive series of concentric circles, like a target board (Figure 1). The lesions resulted in cavities filled with a dry pithy material consisting of both fungal hyphae and decayed host matter (Figure 2). These signs and symptoms were quite distinct from those of the well-known Rhizoctonia root and crown rot disease (RRCR) caused by R. solani.

Richards mentions that he learned through correspondence with G. L. Peltier (early UNL plant pathologist) that a similar disease was also observed from Nebraska in 1920. Furthermore, based on preserved herbarium specimens, the disease’s presence could be traced to Utah as early as 1915. DRC has since occurred infrequently throughout other irrigated production areas of the western U.S., and until recently, little else was known about this disease, primarily due to its rare occurrences. 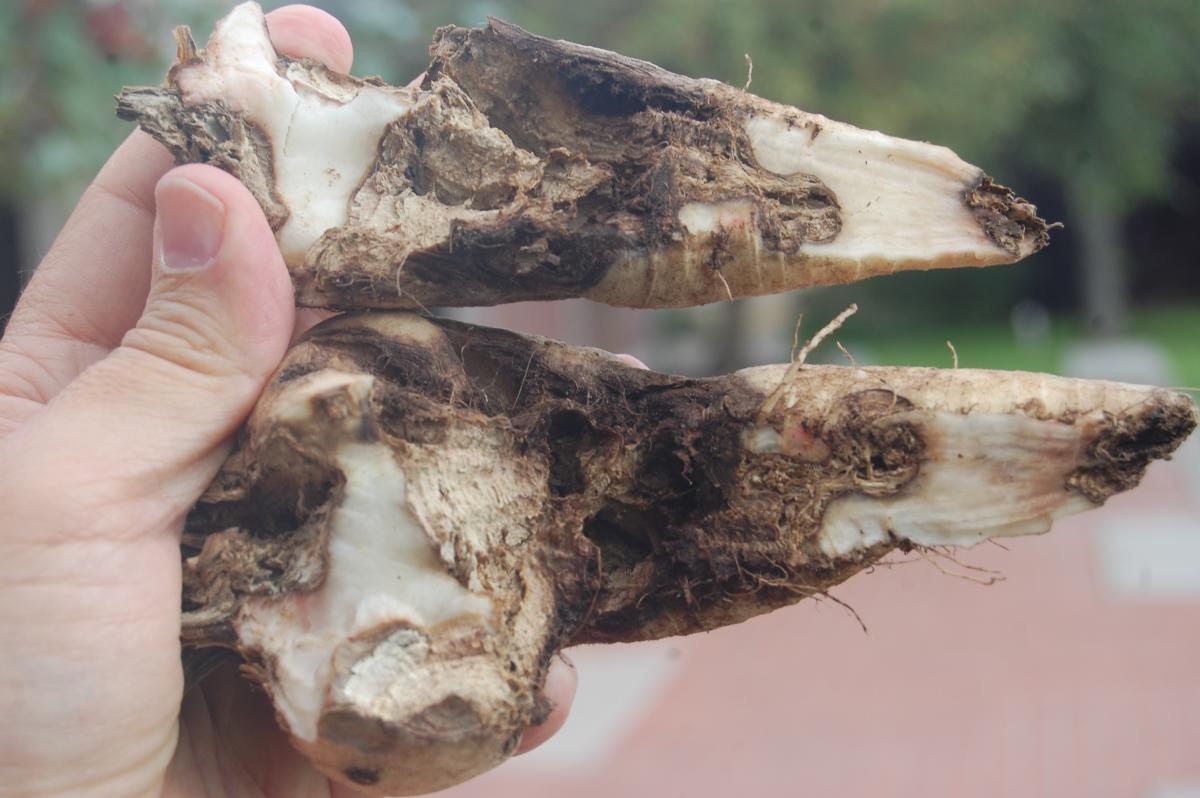 New Appearances
In mid-September 2011 a field near Bridgeport in Morrill County was found to have a high incidence of plants (10-15%) exhibiting wilting and yellowing symptoms suggestive of RRCR. However, root symptoms were different, consisting of sunken lesions with concentric circles and a rot penetrating deep into root tissues like those described by Richards for DRC.

Diagnostic and Field Studies
Molecular analyses of DNA sequences revealed that the DRC isolates had high degrees of similarity (96% identity) with sequences of a binucleate Rhizoctonia species. This is a group of Rhizoctonia species that possess two nuclei within their cells in contrast to the more familiar, multinucleate root and crown root rot pathogen (R. solani). We confirmed this characteristic with microscopic examinations. All subsequent DRC isolates examined to date (more than 20), possess near identical DNA sequences. Based on the different symptoms, unique nuclear condition, and DNA sequence similarities with binucleate Rhizoctonia species, we have demonstrated that the DRC isolates were distinct from the R. solani pathogen associated with RRCR.

We have also conducted recent field studies demonstrating that the DRC pathogen is sensitive to current fungicides and disease-tolerant cultivars in the same manner as R. solani, which is good news for us in future disease management efforts. However, this work also discovered that the DRC isolates actually caused significantly greater yield reductions and disease severity compared with those induced by R. solani when employing cultivars lacking disease resistance.

Concluding Remarks
Richards, the original investigator, presumed that the Rhizoctonia isolates inducing the dry rot canker disease were different than typical R. solani isolates based on different symptoms. This remarkably prescient observation was made long before the availability of our current, more sensitive molecular tools. Our studies have confirmed those suspicions, proving that the pathogen is a distinct Rhizoctonia species, and documented the reemergence of DRC for the first time in almost 100 years.

Harveson, R. M., and Bolton, M. B. 2013. First evidence of a binucleate Rhizoctonia as the causal agent of dry rot canker of sugar beet in Nebraska. Plant Disease 97: 1508.

Robert Wright is a Professor and Extension Entomologist at University of Nebraska-Lincoln. You can reach him by email at rwright2@unl.edu. Follow him on Twitter @BobWrightUNL
View all posts by Robert Wright →
This entry was posted in Center News. Bookmark the permalink.